Publication! Perceived Social Support Moderates the Association Between Household Dysfunction Adverse Childhood Experiences (ACEs) and Self-Reported Drug Use Among Men Who Have Sex with Men in Los Angeles, California

I am always excited to make a new contribution to peer-reviewed literature. This paper was generated from my PhD dissertation research from UCLA’s Fielding School of Public Health, so it has particular significance to me. The entire process of conceptualizing a study, conducting an extensive literature review, proposing and defending methodology, analyzing the data with statistical software, writing the dissertation, and defending it, took two whole years!

In this paper, I found a surprisingly weak relationship between adverse childhood experiences (ACEs) and drug use among low-income mostly Black and Latino men who have sex men (MSM) in Los Angeles. However, the specific dimension of household dysfunction ACEs was more predictive of drug use than the dimension of childhood maltreatment. Furthermore, among those who reported high levels of perceived social support, there was no relationship between household dysfunction ACEs and drug use, and among those perceiving low levels of perceived social support, a relationship existed. I concluded that promotion of social ties in the community may help reduce the burden of substance use among MSM exposed to ACEs. 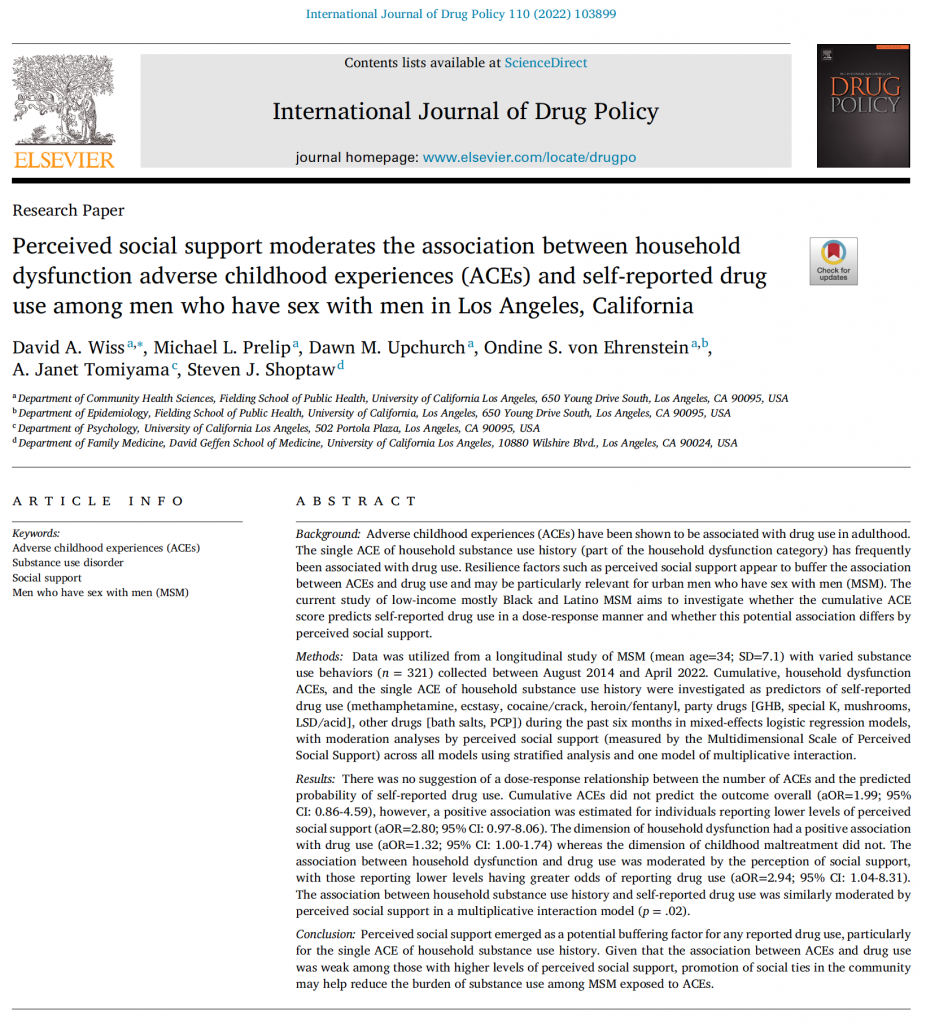 Background: Adverse childhood experiences (ACEs) have been strongly associated with drug use in adulthood. The single ACE of household substance use history (part of the household dysfunction category) has frequently been associated with drug use. Resilience factors such as perceived social support appear to buffer the association between ACEs and drug use and may be particularly relevant for urban men who have sex with men (MSM).

Methods: Data come from a longitudinal study of MSM with varied substance use behaviors (n=321) collected between August 2014 and April 2022. Cumulative, household dysfunction ACEs, and the single ACE of household substance use history were investigated as predictors of self-reported drug use during the past six months in mixed effects logistic regression models, with moderation analysis by perceived social support across all models.

Results: There was no evidence of a dose-response relationship between the number of ACEs and the predicted probability of self-reported drug use. Cumulative ACEs did not predict the outcome, however this relationship appeared worse for individuals reporting lower levels of perceived social support. The dimension of household dysfunction had a stronger prediction of drug use than the dimension of childhood maltreatment, and this association was moderated by the perception of social support, with those reporting lower levels having higher odds of reporting drug use. The association between household substance use history and self-reported drug use was similarly moderated by perceived social support in a stratified model and in a statistically significant model using an interaction term.

Conclusion: Perceived social support emerged as a potential buffering factor for any reported drug use, particularly for the single ACE of household substance use history. Given that the association between ACEs and drug use was weak among those with higher levels of perceived social support, promotion of social ties in the community may help reduce the burden of substance use among MSM exposed to ACEs.