Is Muscle Dysmorphia related to Addiction? 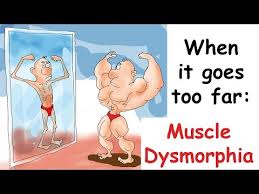 A growing number of adolescent and adult males are dissatisfied, preoccupied, and even impaired by concerns about their physical appearance. When body image dissatisfaction, compulsive exercise, and dysfunctional food intake combine and intensify, there is a risk for a psychiatric condition known as muscle dysmorphia. Muscle dysmorphia shares characteristics with eating disorders, obsessive–compulsive disorder, and body dysmorphic disorder. This condition has become more common and is frequently associated with anabolic steroid use. This particular disorder is found primarily in the male population, and as the diagnosis of eating disorders in men continues to rise, there are more patients identified as having this condition, particularly in addiction communities. Unfortunately, most men with muscle dysmorphic disorder are not inclined to seek help, classifying this condition as ego-syntonic (values are consistent with one’s ideal self-image).
While muscle dysmorphia shares some commonalities with other DSM-5 disorders, it does have characteristics that are unique. In particular, this condition is a disturbance of body image perception in which individuals become obsessively preoccupied with the belief they are too small, too thin, or insufficiently muscular. However, in most cases, these individuals are actually more likely to have a higher proportion of lean body mass than the average person. There are a number of associated behaviors that may accompany this condition, such as a rigorous weight-lifting regimen, a diet that is protein and high-energy intake focused, and in some cases, the desire to avoid public body display. Many individuals that are living with this condition are convinced they look much smaller than others of similar size, leading to considerable social impairment and emotional distress. Most men with muscle dysmorphia have educated themselves about nutrition through bodybuilding communities, so a part of treatment may include re-education about sensible eating that can be sustained over the lifespan.

Eating Disorders In The Male Population

For decades, eating disorders were commonly considered to be a female problem. This belief came from the overwhelming predominance of women that chose to seek help for their condition. The idea that women were the only ones struggling with disordered eating was perpetuated when treatment facilities began to tailor programs specifically for female patients. Until recently, the psychiatric community identified the absence of menses as diagnostic criteria for anorexia nervosa. Finally, an increasing number of men are now seeking treatment for eating disorders and these conditions are now known to impact both genders. With the growing amounts of males seeking treatment, healthcare professionals are now seeing more cases of muscle dysmorphia, particularly in addiction treatment settings, where they have traditionally been undetected and unaddressed.

Muscle dysmorphia shares several characteristics with eating disorders, and there is a resemblance with obsessive-compulsive disorders. Common compulsive behaviors include rigorous dietary rituals, excessive exercise, self-inspection, and reassurance seeking. This condition is characterized by obsessive thoughts that are centered on the relentless pursuit of muscularity.
One study reports that 22 % of male subjects suffering from muscle dysmorphia formerly met criteria for anorexia nervosa. Additionally, 13 % of these individuals met the criteria for bulimia nervosa. These eating disorders resemble muscle dysmorphia in that they both involve a compulsive preoccupation with perceived physical inadequacies as well as a drive to cover up defects and excessive exercise. It is very common for these individuals to avoid activities involving eating due to fear of disrupting their diet, or forgo personal relationships that may interfere with the time needed to focus on working out or food preparation.

Muscle dysmorphia is frequently associated with various types of substance abuse—most notably, appearance and performance-enhancing drugs. Anabolic steroids, classified as schedule III controlled substances, are the most widely sought after and abused drugs in this category. In addition to the damage that steroids cause, additional long-term consequences include dependence syndromes and progression to other recreational drugs. In fact, a recent study focused on a population living in a treatment facility found that a significant percentage of male heroin addicts used opioids to counteract associated depression and withdrawal following steroid use.
Individuals who meet criteria for muscle dysmorphia often display distorted self-perception, exercise compulsivity, disordered eating, and abuse performance-enhancing agents. This can be further complicated by habitual and entrenched substance abuse as well as dependence syndromes on stimulant-based pre-workout supplements, which are legal, unregulated and can be purchased easily. Many of these formulas contain illegal stimulants that can lead to a positive urine analysis and create chaos and confusion for the addict in early recovery.

There are a number of treatment options when treating muscle dysmorphia. In addition to stopping muscle hypertrophy training, reducing or eliminating excessive sports supplements, including protein/amino acids, creatine, and pre-workout formulas are important goals. Reducing overall protein intake, which reportedly can be as high as 3 g/kg bodyweight, is often resisted by many bodybuilders who believe this will lead to muscle atrophy. Arguably the most critical objective is to avoid the diet-related extremes driven by the constant preoccupation regarding body image that characterizes these individuals.

The first barrier to treatment in muscle dysmorphia is in identifying the disorder, since patients often look healthy from an outward perspective, and often get reassurance from society. As prevalence rises and body image disturbance in males becomes more common, there is a need for more sophisticated assessment tools. More research is needed to uncover neurobiological and psychosocial factors that may underpin the unique pressures males experience with respect to accepting or trying to perfect their physical appearance. Sustainable recovery should be based on therapeutic strategies aimed at normalizing the self-destructive thoughts, emotions, and behaviors that characterize this complex and incompletely understood condition. Men in addiction treatment settings and sober livings should be screened for muscle dysmorphic disorder and referred to psychiatrists, therapists, and dietitians for help. To my knowledge there is not a treatment center in the United States designed exclusively for the treatment of muscle dysmorphic disorder.
Purchase an academic publication by David Wiss MS RDN HERE