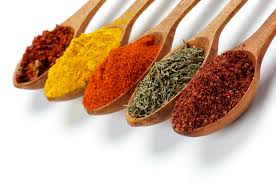 Many of us have eaten a variety of herbs and spices throughout our life without much thought about it. What you may not know is that in addition to adding flavor and making our food more interesting, some healthful herbs and spices have a number of health benefits. In fact, some of your favorite spices that you enjoy on a daily basis may be helping to fight illness, boost energy, and add years to your life!

Ginger has been used for centuries for its perceived medical benefits. It has shown to have a powerful anti-inflammatory impact on the body, largely due compounds called gingerols. Individuals that struggle with rheumatoid arthritis have experienced a reduction in related pain when including ginger into their routine. In addition, ginger may have a positive impact on gastrointestinal distress and can help relieve symptoms associated with nausea. A simple and delicious way to enjoy fresh ginger is to make tea with it. Just place a small amount in a cup, pour boiling water over, and let steep for 4-5 minutes.

Garlic is used in numerous cuisines around the world and is something that almost everyone has tried at some point in their life. In fact, there is evidence that Ancient Egyptians cultivated garlic as far back as 5,000 years ago. When eaten regularly, it can have a dramatic impact on the cardiovascular system. The “stinking rose” as it is sometimes referred to helps to protect blood vessels and blood cells from oxidative and inflammatory stress. This can assist in reducing chances of atherosclerosis and heart attack. Fresh garlic can be enjoyed in a countless number of ways to add depth of flavor. It is the perfect addition to marinades, salad dressings, soups, and stews.

Cinnamon has a host of health benefits when eaten regularly, in large part due to a compound called cinnamaldehyde. This compound is also responsible for giving cinnamon its distinct flavor and aroma. Some research has shown cinnamon to have a positive impact on insulin resistance and may have an anti-diabetic effect when enjoyed consistently. It is able to help decrease the amount of glucose that enters the bloodstream after a meal by interfering with several digestive enzymes that break down carbohydrates. Cinnamon is easy to include in your routine and makes a delicious tea when combined with ginger. Sprinkle some on sweet potatoes and roast in the oven for an incredible treat!

Turmeric has a distinct flavor and color and is used by a variety of different cultures in a number of different recipes. It contains a compound called curcumin that has been proven to contain powerful anti-cancer properties. In particular, it has been studied for its impact on cancers of the digestive tract. In addition, it is useful in the fight against Crohn’s disease, ulcerative colitis, and inflammatory bowel disease. Turmeric can be enjoyed in a variety of ways including salad dressings, tea, and other ethnic dishes.

Healthful herbs and spices not only provide delicious flavor to our meals and snacks, but also a host of health benefits. The inclusion of spices in cooking can also help to reduce the need for added salt or sugar. Find your favorite herbs and spices and include them regularly!