The Food and Nutrition Conference and Expo (FNCE) is the largest nutrition conference of the year. This year FNCE 2016 was in Boston October 15-18. View the sessions from 2016 HERE and the exhibitors HERE. Mr. David Wiss attended this year, presenting his poster “Hands-on Nutrition and Culinary Intervention Within a Substance Use Disorder Residential Treatment Facility” with Kristie Moore MS RDN. 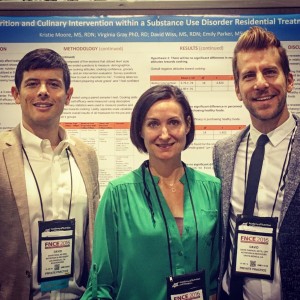 David also attended FNCE 2016 to carry out an important mission spurred by Dietitians for Professional Integrity, which is to elevate the public perception of the dietitian credential by severing ties with problematic food companies. Mr. Wiss wrote an important guide for fellow attendees HERE.This document highlights five 2016 FNCE sessions with conflicts of interest that concern us, particularly in regards to speakers who have industry ties that directly relate to the topics they are speaking about.

Mr. Wiss generated a report after the conference, stating: “We recommend a vetting process to ensure that the companies and trade groups at the expo hall are appropriate for a nutrition conference. Some may argue that the presence of purveyors of highly processed foods is necessary so dietitians can be aware of products our clients may come across. However, we can easily remain aware of that by visiting company websites or simply perusing the aisles of local grocery stores. At least that way we are not learning about a new product via a company rep that has been given talking points to specifically market the product.” Read the full recap HERE.
While at FNCE, Mr. David Wiss was interviewed by a member of the Associated Press who published an important article: Do Candy and Soda Makers Belong at a Dietitian Conference? Mr. Wiss states that conflict of interest has “been an important topic in the pharmaceutical world, and now it’s becoming a much more important topic in the nutrition world.” Other articles reporting on the conference discussed close ties between nutritionists and the food industry, and how many nutritionists want to sever those ties.

FNCE 2016 was a lot of fun! We networked, attended some great sessions, and continued to advocate for a future that is not riddled with industry influence. We are thrilled with the progress made in the last three years.
It is encouraging to see incremental changes at the Academy of Nutrition and Dietetics annual conference.
We have also identified the following areas for improvement:
1. Discontinue CPEs for industry-sponsored educational sessions
2. Implement a vetting process for expo hall exhibitors that examines companies not just by the products they sell, but also by their political actions (i.e.: what do they lobby for/against?)
3. Acknowledge well-researched and thoroughly documented issues surrounding bias and influence so we can address them cohesively as a profession.